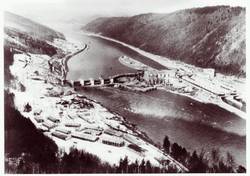 With almost 3000 km the Danube is the longest river in Central Europe. After the unification with the Inn and Ilz in Passau, it forms the state border on a length of about 20 km. On the basis of an intergovernmental agreement between the Federal Republic of Germany, the Republic of Austria and the Free State of Bavaria, the Donaukraftwerk Jochenstein AG (DKJ) was founded in 1952 and the power station Jochenstein near Donau-km 2203 was built between 1952 and 1956. Up to this point, the Danube has a catchment area of 77000 km, an average water supply of 1420 m³/s and a maximum water supply of 9200 m³/s (flood 1954). With an upstream water level of 290.00 m above sea level, the drop height for mean water is 9 m.

The DKJ is a public limited company under German law with a branch in Austria. The shareholders are Österreichische Elektrizitätswirtschafts AG (Verbundgesellschaft) (50%), Rhein-Main-Donau AG (49.5%) and E.ON Energie AG (0.5%).

On a length of approx. 100 km from the mouth of the Salzach into the Inn to Jochenstein/Engelhartszell and a short stretch in the Kufstein/Kiefersfelden area, the Inn and Danube form the border between the Federal Republic of Germany and Austria. Grenzkraftwerke GmbH (GKW) was founded in 1999 to operate the power plants along this border section and operates the power plants of Donaukraftwerk Jochenstein AG and Österreichisch-Bayerische Kraftwerke AG (Kraftwerke am Inn).