Further considerations on the development of the Donauleiten 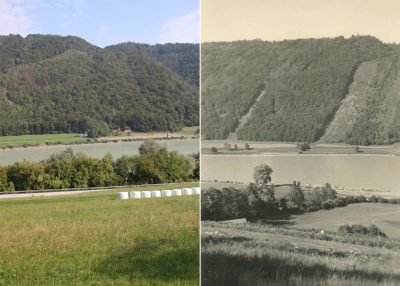 Landscape change, Danube valley, Passau, DonauleitenThe Donauleiten is an area which is characterised by its diversity of habitats and the species diversity it brings with it. The mosaic-like coexistence of often small or very small habitat types is a striking feature of the Passau Danube slopes. In view of the biogeographical location of the Durchbruch valley, more open, thermally tinted biotope types (block heaps, rocks and rock heads, light oak-emphasised slopes) are of particular importance. The Donauleiten can therefore be described above all as outposts of species with Southern European, Pannonian and continental distribution centres.

After the last ice age and before an intensive use of the Danube valley by man (agriculture, traffic, settlements on the valley floor; forest use on the slopes), open habitats in the Danube flows may have been limited to rocky areas, block heaps, the banks of the Danube (rock, gravel) and temporary windthrow areas. Increasing settlement has probably led to an intensification of use both on the valley floor (settlements, paths, agriculture) and on the slopes (forestry). Depending on the resource requirements, the use of the forests probably varied in intensity (e.g. wood requirements for iron smelting during the Celtic period). It is not to be assumed that the Danube slopes will be continuously managed in terms of intensity and form of use.

The most recent wave of use of forest stands (medium and coppice forest management) since about the 18th century has probably led to a significant increase in the proportion of “open” and semi-open habitats. A reversal of this trend can currently be observed as a result of changes in use or abandonment of use since the 1950s (crown seal). Special sites, such as rocky areas and block heaps, are excluded from this trend and growth here is much slower.

It can be stated that the crown seal since the 1950s has led to a more or less significant change in habitats. Up to this point, more intensive forest use can be observed in accessible parts of the area. The proportion of clear cut areas was correspondingly high. As a result, a short-term and local promotion of thermophilic open land and seam species is to be assumed. The openness of the slopes as a result of such “use events” was very likely, but generally of rather short duration. It is to be assumed that scrubland will be covered rapidly (due to stick rushes and seed approach) and reforestation will take place (period approx. 10 years). This was probably offset by a relatively small-scale, mosaic-like, coppice forest use.

Due to the extensification of use in the last 50 to 60 years, a shift (quantitative, partly qualitative?) in thermophilic open land and mule species towards (thermophilic) forest species can be assumed. According to current knowledge, however, there is no significant loss of species!

In general, forests represent the predominant part of the vegetation in the Danube rivers, both naturally and due to their use. The current nature conservation status of many forest areas in the area can be described as hardly or moderately valuable in terms of their structure (maturity, closeness to nature). This is due to the relatively low age of many stands (<70 years). In (beech) forest stands of the lowlands, extensive ripening structures are formed from a minimum age of about 100 to 150 years. Very valuable stands, on the other hand, are currently mostly found in inaccessible locations (e.g. rocky areas, stream canyons) or areas that have not been used for some time for other reasons. It can, however, be stated that despite the short age of many forest stands in the Danube rivers, a certain “maturation” and dynamism is already beginning. This is certainly due to the local conditions on the slopes. The nutrient and water supply on dry sites on the one hand and the low root resistance of the block protected soil on the other hand play an important role here. On the one hand, this means more stress (drought stress) and consequently faster “ageing” for the trees, and on the other hand a high probability of wind breakage. The latter is demonstrated, for example, by wind break events in the years 2015 and 2016 in the Jochensteiner area, which also resulted in small-scale clearings (<300 m²). It is to be expected that such events will become more frequent as the population ages, as the space resistance of the individual trees (crowns) increases. As a consequence, an irregular new emergence of “islands of light” and an increase in the proportion of dead wood in the forest can also be expected.